What Is The ULEZ

As a means to tackle London’s ever-growing air pollution problem, TFL introduced the Ultra-Low Emissions Zone (ULEZ) on 8th April 2019. But what is the ULEZ and how will it affect you? Let’s dive in to help you understand how these regulations affect your day to day, starting with where is the ULEZ.

Where Is The ULEZ

The Ultra-Low Emission Zone is an area in London where a fee is charged for driving the most polluting vehicles. In October 2021, the ULEZ was extended from central London, using the North and South Circulars as boundaries.

All roads within the circulars must comply with ULEZ rules, whilst any vehicles using the North and South Circulars will not have to comply with ULEZ standards if they are not entering the zone. 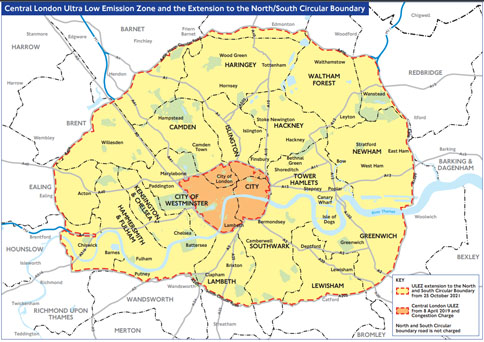 The ULEZ cost carries a daily charge of £12.50 for any non-compliant vehicle. This is in addition to the current congestion charge and will be chargeable 24 hours a day, 7 days a week, except on Christmas Day.

Is My Car Allowed in ULEZ

Whether your vehicle will be affected by the ULEZ will depend on its euro emission standard. When a vehicle is built it must comply with strict emissions regulations which are updated every few years. The current set of standards is as follows:

Euro 4 means petrol cars allowed in the ULEZ can’t produce CO above 1.0g/km, Total HydroCarbon (THCs) above 0.10g/km and NOx above 0.08g/km. In general, this refers to petrol cars first registered with the DVLA after 2005.

Euro 6 means diesel cars allowed in the ULEZ can’t produce CO above 0.50g/km and ​​NOx above 0.08g/km. In general, this refers to diesel cars first registered with the DVLA after September 2015.

For a definite answer on ‘is my car allowed in ULEZ?’ you can check using the TFL website, here.

If your current car doesn’t meet the ULEZ standards and you don’t want to suffer the ULEZ cost, all of Cargiant’s listings now have a checker to make it easier for you to choose, as shown in the example below.

Now that you know what is the ULEZ, why not let Cargiant help you find your perfect car? With up to 8,000 cars in stock, we are certain to find the right car for you. If you would like some extra guidance, we put together a list of the best ULEZ exempt cars, check it out.