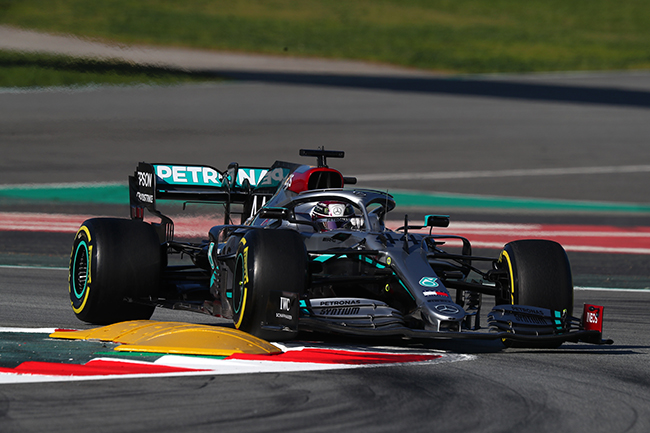 At an awards ceremony in 1995, a 10-year old Lewis Hamilton asked then McLaren F1 team boss Ron Dennis for an autograph and told him of his desire to drive for the team one day. Dennis replied by saying, “phone me in nine years, and we’ll sort something out then.” The two did make contact some years later and Hamilton was signed to the McLaren Driver Development Programme; a scheme designed to take promising racers into F1. After a number of years in junior categories, Hamilton was chosen to drive alongside double world champion Fernando Alonso for the British team in the 2007 F1 season.

Hamilton earned an impressive 4th place on the grid for the season opening Australian Grand Prix, two places behind Alonso. Lewis made a strong start, passing BMW’s Nick Heidfeld for 3rd in the opening stages. Only swapping positions briefly in the pit stops with his teammate, Hamilton finished an impressive 3rd, securing a debut podium.

The following four races had been even better for Hamilton, with four consecutives 4th place finishes. Lewis started the race from pole; the first time of his record-breaking amount and controlled the race, through pit stops and a number of safety car periods following accidents.

Victory made Lewis Hamilton F1’s first black race winner earned praise from former world champion Damon Hill, saying “people should not underestimate what he had done in such a short space of time. F1 legend Niki Lauda also said he was ‘stunned’ by Hamilton’s success.

Lewis Hamilton went on to set a record nine consecutive podiums and four race wins; both of these were records for debutants. Unfortunately, Lewis missed out of the championship in 2007 by only one point.

Lewis Hamilton claimed the first of his seven British Grand Prix wins in 2008. Starting from 4th on the grid, Hamilton found incredible pace in the wet weather, launching his McLaren ahead of the cars in front of him before the first corner. He judged the conditions perfectly whilst his rivals struggled for grid and speed to take victory by over a minute from BMW Sauber’s Nick Heidfeld. 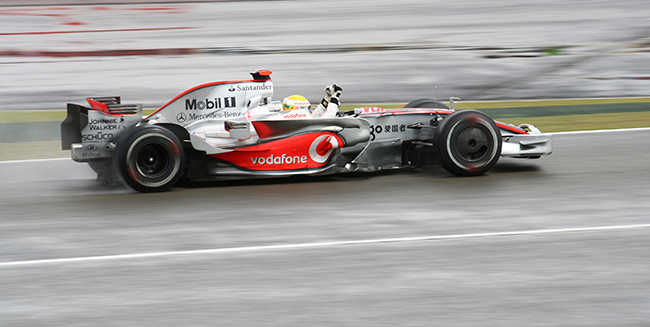 One of the most dramatic Grand Prix of recent history. Lewis was on the brink of winning his first world championship going into the final race of the season in Brazil. His title rival Felipe Massa needed to win the race to realistically give him any chance of securing the crown. Even with a win for Massa, Lewis only needed to finish 5th. Massa qualified on pole with Hamilton in 4th.

The track was damp for the race and Lewis struggled for pace. Massa dominated and took victory with Hamilton down in 6th after being passed by Sebastian Vettel with only a number of laps to go. Moving onto the final lap, Toyota’s Timo Glock was in 4th but on the wrong tyres, losing lots of time. Hamilton was on a charge and on the final corner of the final lap, passed the struggling Glock.

Lewis Hamilton at the age of only 23 was F1 world champion.

At the end of the 2012, Lewis Hamilton announced his shock decision to leave the McLaren team and join Mercedes; a team who had only won one race since returning to the championship in 2010. Mercedes had focused their attentions on the development of a new 1.6-litre turbo-hybrid engine, which was being introduced for the 2014 season. This is believed to have been a major factor in Hamilton’s decision.

For the race itself, Lewis qualified a respectable 3rd but only finished 5th.

Mercedes had dominated F1 since 2014, winning the driver’s and constructor’s championships every year. Lewis Hamilton had won two and Nico Rosberg one; Rosberg announced his retirement after his 2016 victory.

At the 2017 Belgian Grand Prix, Lewis Hamilton claimed pole position. This was his 37th since 2014 and 69th in total; surpassing the record set by 7 times world champion Michael Schumacher.

The 2020 F1 season was thrown into chaos at the start of the year due to the COVID-19 pandemic; Races were postponed and many were unfortunately cancelled. F1 bosses worked tirelessly to get a new race calendar together, ensuring drivers and team members were kept safe.

The Mercedes team at once again dominated the season but at the 2020 Turkish Grand Prix, they were surprisingly off the pace. The track was lacked grip due to the wet weather and relayed tarmac.

During the race, Hamilton maintained his tyres and tackled the conditions perfectly. Whilst other drivers were making multiple pitstops for new rubber and spinning off the track, Hamilton was composed and in control. He crossed the line, winning the race and becoming a 7 times world champion. Earlier in the season he had beaten Schumacher’s race wins record, meaning that now Lewis Hamilton is statistically F1’s most successful driver.

Motorsport UK chairman David Richards has started a campaign for Lewis Hamilton to be knighted in honour of his achievement and contribution to Formula 1. There are however still three races to go in 2020, three more chances to add to the Brits incredible F1 record.