We all know the feeling of getting behind the wheel of the first car we ever bought. Exhilarating is putting it mildly, but not everyone has the budget to pick a Porsche straight out of a dealership. That’s why we’ve compiled a list of our top first cars for under £5,000. Check them out: 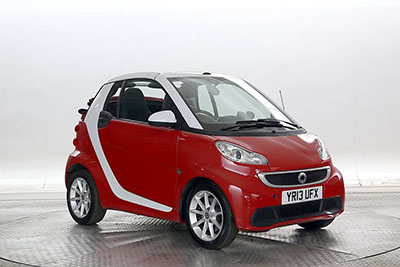 Now 20 years old, the Smart Fortwo remains an incredibly popular supermini. The most common Fortwo features an economical 1.0-litre engine and automatic gearbox, ideal for nipping through the city and squeezing into the tightest of parking spaces. The Smart Fortwo’s 1.0-litre petrol engine is good for 60mpg+ and with a 2007-14 model you’ll never pay more than £30 for a year’s road tax, making it one of the best cheap cars for new drivers.

With a budget of £5,000, you can buy many different trim levels of Fortwo’s, featuring sat-nav, leather seats, a sunroof, Bluetooth and much more.

It’s been 11 years now since the extremely popular Fiat 500 was reborn. The stylish Italian supermini was an immediate hit, selling over 175,000 units in its first full year of production across Europe.

It makes our list of the best first cars under £5,000 given that with that budget you can get a Fiat 500 Pop with a 1.2-litre petrol engine capable of over 55mpg and a manual gearbox. Road tax is only £30 for the year and the car sits in insurance group 5, ideal for younger drivers.

Take a look at the Second-hand Fiat 500 in stock. 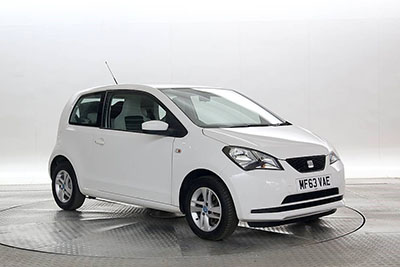 Released in 2012, from a joint project with VW and Skoda, the SEAT Mii was designed as an affordable car for urban driving. The Mii is great for your wallet and the environment. Its 1.0-litre petrol engine can generate over 60mpg and less than 100g/km Co2.

£5,000 could get you a SEAT Mii 1.0 Toco with allow wheels, parking sensors and air conditioning. Furthermore, only £20 a year road tax!

See the current stock of used SEAT Mii for sale.

Similarly to the SEAT Mii, the Peugeot 108 is also part of a three-way joint venture and one of the best first cars under £5,000. In 2005, Peugeot worked alongside Citroen and Toyota to release the 108, C1 and AYGO respectively. All looked similar to one another and were available with the same 1.0-litre petrol engine and 1.4 diesel engine. Now in the second generation guise, each model features more unique styling.

£5,000 will buy you a 108 Active 1.0-litre petrol with a manual gearbox in a range of colours. Interior features include a touch screen display with Bluetooth, air conditioning and electric front windows. A pre-2017 1.0-litre 108 also comes with a £0 road tax!

Take a look at our current stock of used Peugeot 108 for sale.

Though these are the best cheap cars for new drivers according to us, Cargiant has many other models available for under £5,000. Filter your search by budget on cargiant.co.uk to see some of the incredible cars under £4,999 on sale.