The ULEZ is expanding very soon!

The current Ultra Low Emission Zone (ULEZ) has been in force for almost a year but is soon to expand. The new zone will be 18 times the size and cover the majority of London’s streets. Hundreds of thousands of vehicles inside the North and South Circular roads will soon be at risk of the £12.50 daily charge.

In addition to London, other cities including Manchester, Birmingham, Bath, Glasgow, Leeds and Sheffield are expected to introduce emission restricted zones. Some of these as early as this later this year.

What is the ULEZ?

The ULEZ was devised by the Mayor of London as a means to tackle the capital’s ongoing air pollution problem. It charges drivers of higher polluting vehicles £12.50 per day to travel into and within the specified Central London area. This charge is in addition to the current £11.50 congestion charge, which means some drivers will be paying £24 every day just to drive around the capitol.

The Department for Transport declared that 9.5 million of the 12.9 million diesel vehicles inside the ULEZ at the time of introduction were chargeable.

Where is the ULEZ expanding to?

Currently the ULEZ covers the same area as the Central London Congestion Zone, but from 25th October 2021 it will expand to include the inner London area bounded by the North and South Circular roads; an area in which over 3.5 million people live. 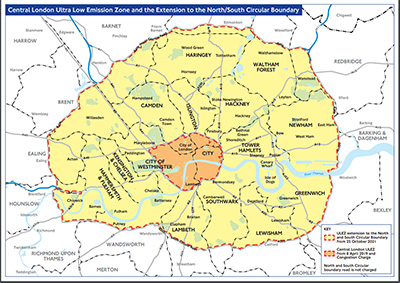 What cars are exempt?

Only Euro 6 diesel cars are exempt. Almost every car registered since 1st September 2015 will be exempt, as well as a small number which complied to the standards early.

When looking for a diesel car, we have over 1,500 in stock, ranging from the small Mini Cooper hatchback, premium BMW 320D and Land Rover Discovery Sport 7-seater SUV.

All Euro 4 vehicles onwards. Euro 4 standards came into force in 2005, but some vehicles dating back to 2001 may be exempt.

Petrol cars come in all kinds of shapes and sizes including the town and city run-around, the Fiat 500, ever popular Volkswagen Golf and spacious Nissan Qashqai.

All electric vehicles are exempt.

If you are looking to make the switch to electric, we’d recommend the Nissan Leaf or BMW i3.

The majority of brands now make a form of hybrid vehicle. A few of our favourites are the Toyota Yaris hatchback, Mercedes C350e premium saloon and BMW X5 SUV.

If you drive a non-compliant car, it is time to act. Start the search for your new car by following this link;