This weekend plays host to the Australian Grand Prix, the first race of the 2019 Formula 1 season. Bring with it an array of intriguing and exciting questions, can Lewis Hamilton and Mercedes claim a 6th crown, how will Sebastian Vettel cope against his new hotshot teammate Charles Leclerc and will Daniel Ricciardo’s Renault gamble pay off? This blog post will give you all the information you need to prepare yourself for F1 2019.

The F1 paddock was shaken in mid-2018 when Australian Daniel Ricciardo announced he was to leave Red Bull for whom he had won 7 races and join Renault. Renault themselves will be looking to improve on a positive 2018 when they finished 4th in the constructor’s championship. The other big shake-up in the field is young Monegasque driver Charles Leclerc replacing experienced 2007 champion Kimi Raikkonen at Ferrari, who himself will be driving for Alfa Romeo Racing, formally Sauber. Overall, there will be 3 British drivers on the grid in 2019, Mercedes’ 5x champion Lewis Hamilton, F2 champion George Russel at Williams and Lando Norris who will be driving for McLaren. 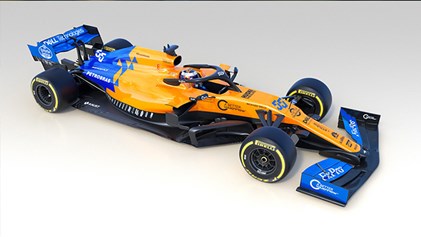 This year’s cars have been through a few noticeable changes. The main one being the introduction of a much wider and simplified front wing. This combined with new simplified front brake ducts will reduce turbulence for the car behind allow it to race closer, therefore improving wheel to wheel action. The rear wings have also been through a re-design. In 2019, they are wider and taller than before meaning the cars will generate more downforce at the back and improve airflow. The DRS flap has also been lifted which could see a 25% increase in DRS effectiveness.  A change that will not be as easy to notice is a 5kg increase in fuel, which means the drivers can use their engine’s maximum power for longer.

The 2019 calendar remains almost identical to the 2018 season, visiting the same 21 racetracks all around the world. The season follows tradition and starts in Australia and ends with a twilight race at Abu Dhabi’s extraordinary Yas Marina circuit. The Chinese Grand Prix on 14th April will be the 1,000th F1 Grand Prix.

There are 2 major rule changes that will affect the grid in 2019. The first being the awarding of a bonus point to whichever driver secures the race’s fastest lap, as long as they finish in the top 10. This is to prevent a driver who is languishing towards the back of the grid with nothing to race for, making a pit stop and fitting a set of the fastest tyres, simply to go out and score the fastest lap.

The second rule change relates to the combined weight of the driver and his car. In 2018, the car and driver weight were measured as a combination rather than individual. The minimum weight for car and driver was 734kg, meaning if the car was underweight, the team had to add ballast to compensate. This could work as an advantage for some drivers, who would have the ballast and place it strategically to improve balance. This year, the car and driver will be measured separately, with the minimum weight for the driver expected to be 80kg. If any driver is under weight, ballast will only be added around the driver’s seat and prevent any advantage.

There are only a few days to wait until lights out in Australia and until we get an idea of what the 2019 F1 season may bring. One thing is for sure though, it’s going to be a good one!